Bill and Ted's Bogus Journey is a 1991 film and sequel to Bill & Ted's Excellent Adventure. In it, Chuck de Nomolos sends two evil robot versions of Bill and Ted to kill the original human Bill and Ted. They succeed and the duo are sent to hell.

The music of Bill and Ted's band, Wyld Stallyns, has created a utopian future society. Rufus now works as teacher at Bill & Ted University. He used the Time Booth to travel back in time to bring historical figures; Thomas Edison, Sir James Martin, Johann Sebastian Bach and Ria Paschelle to the future to teach his students. In one such lesson Chuck De Nomolos, who detested this society, steals the phone booth and sends two robots Evil Bill and Evil Ted back to the late 20th century to prevent Bill and Ted from winning the San Dimas Battle of the Bands. Rufus attempted to stop De Nomolos by leaping after the booth but seemingly becomes lost in the Circuits of Time.

Bill and Ted's souls are met by Death who challenges them in a game for their souls. Bill and Ted escape after giving Death a "Melvin". They attempt to alert their families but their ethereal forms prove difficult, and at one point, are cast down into Hell at a séance held by Missy. In Hell, they are tormented by Satan, made to face their own fears, manifesting as Col Oates, the Easter Bunny, and Granny S Preston, and realize their only escape is to take Death's offer. Taken to Death's chambers, the spirit gives them the option of what game to play. Bill and Ted, to Death's dismay, select modern games like Battleship, Clue and Twister, easily beating Death. Death admits defeat and unwillingly becomes their servant. Bill and Ted recognize they need to locate the smartest person in the universe to help build robots to counter De Nomolos' evil robots. Death escorts the two to Heaven, and with God's help, are directed to an alien named Station who has the ability to split into two identical twins, and readily offers to help Bill and Ted.

Death brings them back to the mortal world, where it is the night of the Battle of the Bands. Bill and Ted take Station to a hardware store, and then race in their van back to the concert while Station constructs good robots. Just as the evil robots take the stage, Bill and Ted arrive, and Station's robots easily defeat the evil ones. De Nomolos appears in the time booth, ready to defeat Bill and Ted himself, and overrides the broadcasting equipment to send the video footage of this to everyone on the planet. The two recognize they can later go back in time to arrange events for De Nomolos to be trapped in the present, aided by Death and Station; though De Nomolos is apparently able to do the same, Bill and Ted gain the upper hand with the explanation that it is only the winners who get to go back, and De Nomolos is arrested by Ted's father, after suffering a "Melvin" at the hands of the Reaper. Ms. Wardroe reveals herself to be a disguised Rufus, having assured Bill and Ted's spot in the concert, and urges them to play.

As was particularly common at the time, the soundtrack album focuses on the rock music heard throughout the film. An album of the full orchestral score by David Newman would not become available until 2007.

The song Bill and Ted play for the battle of the bands is "Final Guitar Solo" by Steve Vai, which he wrote to help blend into "God Gave Rock 'N' Roll to You II" by Kiss, although Bill appears similar in appearance to Dusty Hill and Billy Gibbons from ZZ Top.

There's also a reference to the lyrics from "Every Rose Has Its Thorn" by Poison.

To coincide with the release of the Bill & Ted's Bogus Journey, Marvel Comics released a one-shot comic book adaptation of the film, hiring Evan Dorkin to adapt the screenplay and pencil the art. Like Archie Goodwin's adaptation of the first Star Wars film film, Dorkin worked from the original script, which included many deleted scenes such as the fears from Hell attempting to block Bill and Ted from the concert, and Evil Bill and Ted killing Bill and Ted before they remind the Reaper that they are owed lives from beating him so many times. Death was portrayed as the archetypal skeletal figure. Due to the popularity of the comic, Marvel commissioned a spin-off series, Bill & Ted's Excellent Comic Book, which kept the talents of Dorkin, DeStefano, and Severin. The series ran for 12 issues, featuring original stories, such as Death taking a vacation, a medieval version of Bill and Ted, Bill and Ted gaining a band manager, a return by DeNomolos, an attempt to stop John Wilkes Booth, and meeting Little Bill and Ted from the future.

Critical reception to the movie was mixed. Rotten Tomatoes, a review aggregator, reported that 54% of 50 surveyed critics gave Bogus Journey a positive review; the average rating was 5.93/10. The film's consensus stated: "Bill & Ted's Bogus Journey has the same stars—and cheerfully wacky sense of humor—as its predecessor, but they prove a far less effective combination the second time around." 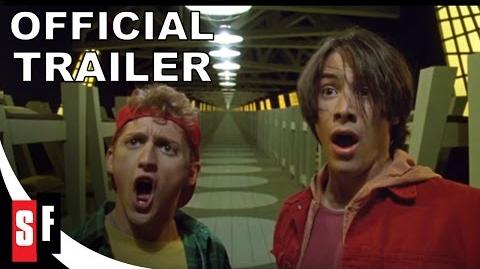