William Stanley Preston, Esq. (Also known as Bill) was, along with his best friend Ted, co-founder and guitarist of the rock-group Wyld Stallyns.

After an excellent adventure through time and a bogus journey through the afterlife, Bill & Ted's Wyld Stallyns eventually became known as the greatest rock-group to have ever lived, and their music became the basis of all society, inspiring universal harmony.

Bill is male and has a white ethnicity. He wears a shirt that exposes his stomach.

Bill S. Preston, Esq. was born and raised in San Dimas, California. He later became best friends Theodore "Ted" Logan. He enjoys bands like Led Zeppelin, Iron Maiden and other rock groups that were popular during the 80's. One of his most well-known goals is to start a band with Ted called Wyld Stallyns though neither Bill nor Ted actually know how to play any instruments. He lives with his dad and step-mother named Missy. It's also implied that Bill has some kind of infatuation with Missy as well, as he gets irritated every time Ted says, "Your step-mom's cute." Ted also reveals that Missy isn't too far from the boys' age either when he states, "Remember when she was a Senior and we were Freshman?"

In the year 2688 A.D. Rufus used a a time-traveling phone booth to travel back to 1988, some 700 years previously. His mission: to make sure that the Two Great Ones Bill & Ted remain together to form the band "Wyld Stallyns", whose music will become the core of the future's Utopian society. Rufus finds that Bill and Ted are on the verge of failing their high school history class, and, should Ted fail, his father, will ship him off to an Alaska military academy, effectively ending the pair's dreams of forming a band. As the two try to write a history report by asking customers questions at a local Circle K, Rufus introduces himself to them. Though Bill and Ted are skeptical of Rufus' claims, they are convinced when future versions of themselves land nearby and explain the situation to them. Rufus reveals to Bill and Ted the secrets of the Circuits of Time, which can transport the user anywhere in time. Their first stop: Austria, in the year 1805 and Napoleon Bonaparte, who is preparing to lead his French Imperial Forces into battle. Returning to the present, Rufus leaves the two with the phone booth, stating that Bill and Ted will be able to travel anyplace in time, but only "as long as you remember this: no matter what happens, you must get to that report." Seconds later, they discover that they had somehow dragged Napoleon back with them into the present. An idea soon forms: to pass their history exam, Bill and Ted will go back in time and kidnap other historical figures and have them explain what they think of the San Dimas of the present. The Stallyns then leave Napoleon with Ted's younger brother, Deacon, while they travel back to the past.

Rufus later joined Bill and Ted as they practice and congratulates them on their report. Rufus brings in Princesses Elizabeth and Joanna, whom he rescued from their father (and from getting married "to those royal ugly dudes"), and explains that he's introduced them to the modern century, and that they too are destined to be part of Wyld Stallyns. As the four begin to play an amateurish cacophony of music, Rufus breaks the fourth wall and assures us, "They do get better."

The music of Bill and Ted's band, Wyld Stallyns, has created a utopian future society. Chuck De Nomolos, who detests this society, steals one of phone booths and sends Evil Bill & Evil Ted two robots to the late 20th century to prevent Bill and Ted from winning the San Dimas Battle of the Bands. Rufus attempted to stop De Nomolos but seemingly becomes lost in the circuits of time.

Bill and Ted's souls are met by Death who challenges them in a game for their souls. Bill and Ted escape after giving Death a "melvin". They attempt to alert their families but their ethereal forms prove difficult, and at one point, are cast down into Hell at a séance held by Missy. In Hell, they are tormented by Satan, made to face their own fears, manifesting as Col Oates, the Easter Bunny, and Granny S. Preston, Esq., and realize their only escape is to take Death's offer. Taken to Death's chambers, the spirit gives them the option of what game to play. Bill and Ted, to Death's dismay, select modern games like Battleship, Clue and Twister, easily beating Death. Death admits defeat and unwillingly becomes their servant. Bill and Ted recognize they need to locate the smartest person in the universe to help build robots to counter De Nomolos' evil robots. Death escorts the two to Heaven, and with God's help, are directed to an alien named Station who has the ability to split into two identical twins, and readily offers to help Bill and Ted.

Death brings them back to the mortal world, where it is the night of the Battle of the Bands. Bill and Ted take Station to a hardware store, and then race in their van back to the concert while Station constructs good robots. Just as the evil robots take the stage, Bill and Ted arrive, and Station's robots easily defeat the evil ones. De Nomolos appears in the time booth, ready to defeat Bill and Ted himself, and overrides the broadcasting equipment to send the video footage of this to everyone on the planet. The two recognize they can later go back in time to arrange events for De Nomolos to be trapped in the present, aided by Death and Station; though De Nomolos is apparently able to do the same, Bill and Ted gain the upper hand with the explanation that it is only the winners who get to go back, and De Nomolos is arrested by Ted's father. Ms. Wardroe reveals herself to be a disguised Rufus, having assured Bill and Ted's spot in the concert, and urges them to play.

After a horrendous performance at his brother's wedding, and possible marriage troubles with their respective spouses; Ted confides with Bill, conceding that they won't ever write the song - leaving their future in doubt. Moments after, a futuristic vehicle appears and exits Kelly, the daughter of Rufus. Kelly takes Bill and Ted to meet with her mother, The Great Leader, who implores the two that there would need to be a song that unites humanity all across time "at 7:17pm at MP 46", or time periods will continue to glitch into one another, thereby having time and space collapse on itself.

Bill and Ted attempt to steal the song from the future versions of themselves, but with each jump ahead into the future, they come across themselves in progressively worse situations, like their 2025 selves pretending to live in Dave Grohl's mansion and pass off a song by them.

They realize in time that really their daughters, Thea and Billie, are the ones who will unite the world in song. With this, Thea and Billie's song is powerful enough to restore the balance of time and space, finally uniting the world and all across time.

At the end of the film, in a flash forward, elder Bill and Ted in 2067 check up on each other's well-being before performing a guitar solo.

Bill was played by Alex Winter in the films and the first season of the animated series. He was portrayed by Christopher Kennedy in the second season and the live-action series.

Bill was based on Chris Matheson's youth and was originally adapted as a character in Chris Matheson and Ed Solomon's improv sketch "Bill, Ted & Bob." 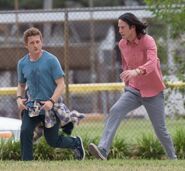 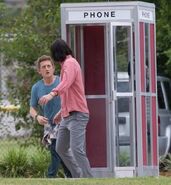 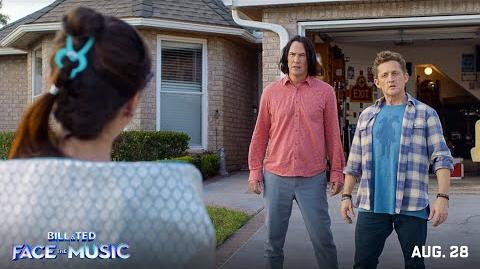