Bill and Ted Face The Music
The phone booth is the time machine in which Bill and Ted travel through time through. Bill and Ted used it to get all the historical figures from the past. It has the appearance of a traditional phone booth with an antenna attached to the top of it. The booth shoots out orange sparks before being grabbed by blue lightning rods and pulled into a light in the ground and travels through the Circuits of History guided by the Circuits of Time Directory. When landing, it is encased in a blue light while falling from the sky before hitting the ground with a thud.

The phone booth makes appearances in Bill and Ted’s Excellent Adventure, Bill and Ted’s Bogus Journey, and Bill and Ted the animated series. It's latest appearance is Bill And Ted Face The Music, where it's depicted as out-of-date and malfunctioning.

A time traveller from the future named Rufus uses the phone booth to travel to 1989 to help Bill and Ted pass their history exam so they can keep their band together and save the future. Rufus demonstrates the time machine to Bill and Ted by traveling to 18th century France and accidentally kidnapping Napoleon Bonaparte.

After keeping Rufus leaves and Napoleon is knocked unconscious, Bill and Ted use the phone booth to pick other historical figures for their exam, including Billy the Kid, Socrates, Sigmund Freud, Ludwig van Beethoven, Joan of Arc, Genghis Khan, and Abraham Lincoln.

At some point during their travels, the booth’s antenna became damaged, causing the time machine to loose control. The group makes a stop in prehistoric times where they fix the antenna with gum and rubber bands, before travelling back to the present and startling two cavemen while disappearing.

The booth is then used during the history exam to show off the historical ‘dudes’ collected along Bill and Ted’s journey. When the exam is done, the machine is used to return the historic folks to their respected time periods.

The last appearance of the phone booth is when Rufus uses it to travel back to Bill and Ted’s garage and gives them new guitars and girlfriends from the past (whom they had met earlier on their adventure), Princess Joanna and Princess Elizabeth. 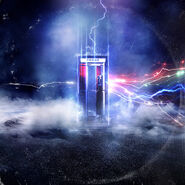